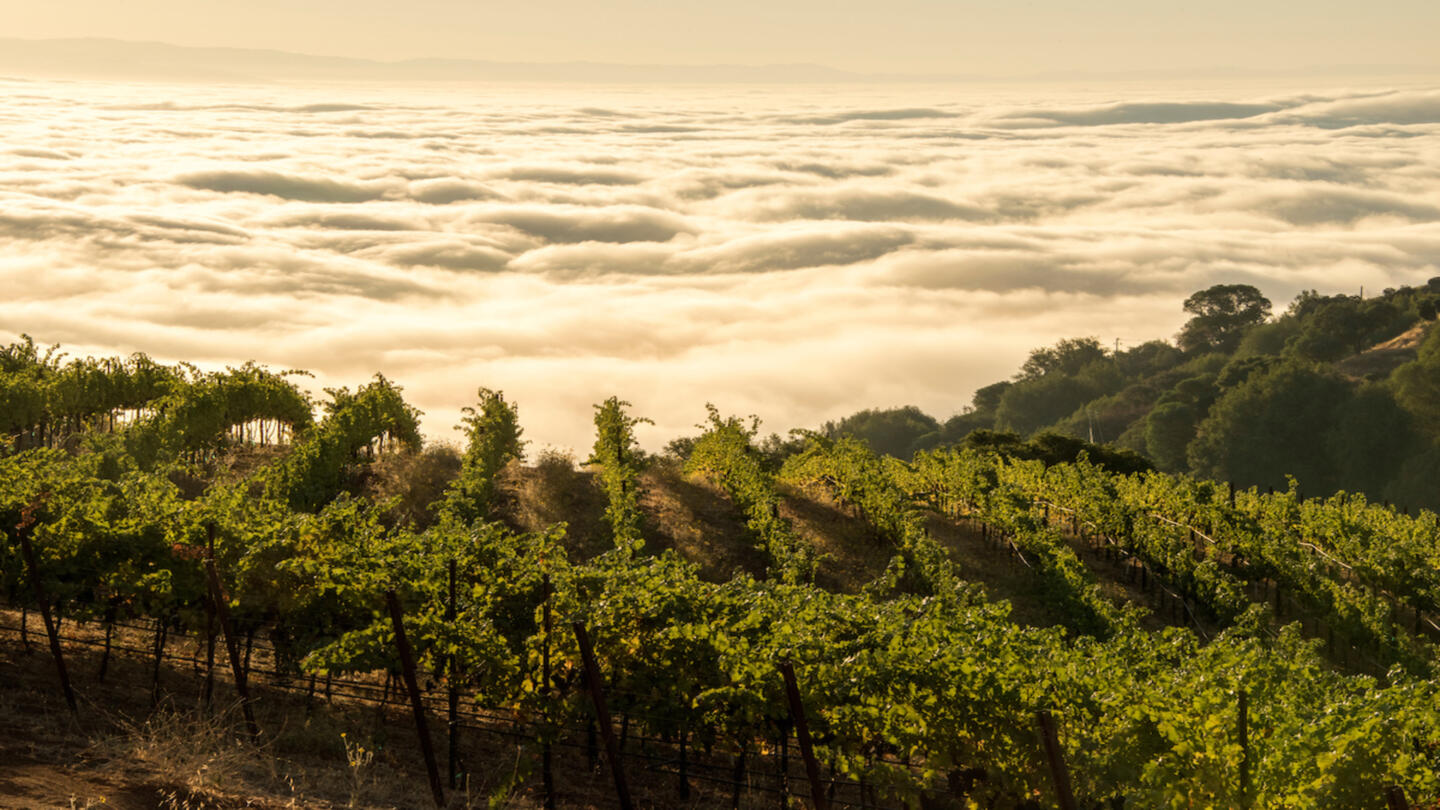 This article looks at the history of the Santa Cruz region and how it came to receive AVA status and world recognition. It also examines the regions topography and climate.

Between 1769 and 1833, Catholic missionaries from Spain established religious outposts in California. Regular church services required sacramental wine, and so the diocese planted vines in an area known today as Harvey West Park. Simultaneously, loggers from the Midwest facing dwindling timber supplies headed west in search of ‘green gold’. As the lumberman sought wood, avaricious prospectors began gold washing in a San Lorenzo River tributary. And though the Californian Gold Rush had begun several years earlier, it wasn’t until 1853, when John B. Trask surveyed the region, that evidence of gold was found from the Soquel River to Point Ano Nuevo. By 1856 several hundred men, including a large immigrant community, had staked claim to an area known as the Gold Gulch.

As workingmen flooded the Santa Cruz Mountains, demand for wine grew exponentially. Happy to satisfy this demand, in 1853 Scotsman John Burns planted the first commercial vines in the county in Ben Lomond. By 1884, local winemakers had received international acclaim and winemaking in the area began to blossom. Locals, as well as French and Spanish immigrants, planted vines where trees once stood. Further, the Great French Wine Blight as well as a Phylloxera outbreak in Napa Valley strengthened demand for domestic wine, at the same time attracting vintners seeking new beginnings. A series of fortuitous events brought about a burgeoning industry, supporting the demand of travelling workers as well as a growing local population.

Though prohibition dampened the mood nationwide, the citizens of Santa Cruz County were universally uninterested in abstaining from alcohol. Rumrunners, moonshiners and bootleggers developed sophisticated systems of transport, shuttling large shipments out of the state. For the Italians of Santa Cruz County, to whom wine was considered a feature of civilised life, prohibition struck particularly hard. Filippo and Giovanni Bargettos and their wives, originally from Piedmont, turned to farm fruits and vegetables. Facing financial pressures, in 1926 the brothers turned to vinifying bootleg wine. Despite a close call with federal agents, the winery survived, existing to this day. Unsurprisingly, the demand for sacramental wine production skyrocketed during Prohibition, many of the church’s vineyards more than doubled in size. Further, physicians were authorised to write prescriptions for medicinal alcohol and a small number of sparkling wine producers survived on this provision alone.

Post-1933, growers began replanting vineyards, further enabled by the Williamson Act of 1965. In 1975, Steven Spurrier selected wines from two Santa Cruz County wineries for his 1976 Judgement of Paris Tasting. Californian wines famously trumped their French counterparts, propelling all involved to stratospheric acclaim. As well as piquing global interest in their respective regions. David Bruce of David Bruce Winery and Dave Bennion and Paul Draper of Ridge had, for some time, been working hard to promote quality in the region, all playing prominent roles in the inception of the Santa Cruz Mountains AVA in 1981. Today, the region is revered, enjoying global recognition, continuing to push boundaries, producing exemplary wines from many varieties. I spoke to David Gates of Ridge, discussing the region’s climate, topography, viticulture and more.

Mean daily summer temperatures average 22°C and peak at approximately 29°C, notably cooler than nearby Napa Valley. Spanning over 300,000 acres from Half Moon Bay in the North to Watsonville in the South, the Santa Cruz Mountains AVA is bound by mountainous terrain, the Pacific Ocean, and the

nearby San Francisco Bay. The area was one of the first AVAs to be defined by its mountain topography, with dramatic variations in elevation across its length and breadth. These stark variations in altitude have wide-ranging effects on the appellation, creating myriad regional microclimates. From 240m above sea level on the eastern slope of the fog line toward San Francisco Bay, 120m on the west-facing the Pacific Ocean and over 900m above approaching the ridge crests, the contrast is broad. Wine style and viticulture vary depending on the elevation of the land, on which side of the mountains are the vineyards, the effects of fog, sun exposure, soil type, and much more. Despite a vast total area, surprisingly only 1500 acres are planted to vines

In addition to altitude, the AVA’s various microclimates are equally influenced by the Pacific Ocean, which the western edge of the area directly faces. The Humboldt Current keeps the Ocean at 56 degrees, generating a bank of fog mid-morning which is sucked inward by the warmer east side of the AVA acting as a heat sink. As the fog is sucked in, the north end of the AVA road that goes up and over to Half Moon Bay acts as a wind tunnel, pulling cold air and fog through the area. While the fog blown in provides the vines with much-needed cooling, the accompanying breeze helps relieve disease pressure.

Ridge’s famed Monte Bello vineyard encapsulates all the above. Ranging in elevation from 1200-2700 feet above sea level, Monte Bello faces the bay as it fills up with fog, though this tops out at around 1800 feet. Dave notes that as he walks the vineyard each morning, ‘a several degree difference can be observed between the lower portion where the Chardonnay is planted and the upper portion where you’ll find the Cab’. At about 1200 feet an inversion layer divides the vineyard. A ‘layer’ of the atmosphere in which the temperature stops decreasing with elevation and instead becomes warmer. Here, Ridge has planted blocks of Chardonnay. These inversion layers also flatten the diurnal curve. Cabernet is planted at various elevations above the inversion layer, producing varying expressions (from herbaceous to ripe fruit) each tasted blind before blending. Following the morning fog (beneath the inversion) the vineyard experiences a neat point in the middle of the day followed by a drop in temperature in the evening.

Today, the regions 1500 acres of vines are divided evenly among Pinot Noir, Cabernet Sauvignon, Chardonnay, and numerous other varieties including Dolcetto, Nebbiolo, Sangiovese, Syrah, Viognier, and more. The areas dominant varieties are characterised by a unique ability to demonstrate a flashy opulence while retaining freshness and ageing well. Its Chardonnay is textural, ripe and rich yet retains staggering freshness. An idiosyncrasy associated with the regions unique landscape. This combination of fog, breeze and a rather broad diurnal temperature variation brought about by steep incline result in a long, slow ripening period that helps maintain a bright acidity you may not see elsewhere, particularly in Cabernet Sauvignon.

Quality notwithstanding, the AVA faces a range of pressing challenges. Harvest is getting earlier, picking would regularly continue into November, David tells me this has not happened since 2011. The impacts of climate change are particularly pertinent at Ridge’s Monte Bello property. Heatwaves with more extreme daily temperatures are a growing problem, resulting in both sunburn and undesirable shifts in berry sugar, organic acids, anthocyanins, and phenolics. Maintaining the AVA’s idiosyncratic freshness has become more difficult. At Ridge, fewer leaves are now pulled than have been in the past. Leaving more vegetation, particularly surrounding the fruit zone, helps protect against sunburn.

Previously the team had pulled leaves, aiming to reduce pyrazine concentration by increasing UV exposure, David tells me that day things are very different than they had been when he joined. Today, some laterals are removed; however, even with more vegetation retained pyrazines are relatively low. Where UV exposure is greater, below the inversion layer, Ridge is experimenting with north-facing plantings. To retain freshness, elegance and typicity, they aim for full phenolic ripeness at lower Brix, maintaining these characteristics. Only once in 50 years (2001) has Monte Bellow topped 14% alcohol.

As is commonplace in mountainous regions, the most prized vineyards in the Santa Cruz Mountains AVA are planted on steep ridges. Despite their many benefits for viticulture, steep vineyards are particularly susceptible to the impacts of heavy rainfall. As it has elsewhere, rainfall in Santa Cruz County has gotten more intense and unpredictable. Sudden rainfall of this type, particularly falling on dry exposed land, causes erosion, depleting soil fertility and damaging vines and fields below. Counterintuitively, drought is also an issue, so far this year (2021) Ridge has recorded 1/3 of the region’s regular rainfall.

Climate notwithstanding, David worries most about urban encroachment, the unrestricted growth of housing and commercial development in the AVA. Silicon Valley, only 30 miles north, produces millionaires by the bucketload. Each of these overnight success stories desires a large property, typically in the hills. This growing demand encourages further development, pushing up property prices as well as endangering open spaces. The Midpeninsula Regional Open Space District seeks to mitigate this.

Struggle is hardwired into the very nature of this AVA. Those establishing winemaking enterprises here were dynamic hardy folk. Daring to dream they planted vines across the region, making wine on hilly terrain where challenge is inherent. Today, thanks to these people, inclusive of a strong immigrant community, the region enjoys enormous success, afforded to it by iconoclasts like Paul Draper and Dave Bennion of Ridge. Strong characters who spearheaded pre-industrial winemaking and a wine style otherwise thought unattainable in California. Recent arrivals continue this tradition, venture capitalists from Silicon Valley like Kent Harvey continue to push boundaries. The region's vineyards and wineries are at the forefront of supporting sustainable practices, including cover crops, erosion control, canopy management, solar, and biodiesel. Jampacked into 1500 acres is an almost unrivalled breadth of quality, innovation and pioneering winegrowing.